Anything can seem to have a sheen of romance to it when it floats in the ether of the past, but a poster of lyrics that folds out from an image that isn’t even the size of half a post card is also a magic act. Before the technical quick fix of  the CD, DVD, mp3 or download, King Cassettes ruled our hearts and they are a love affair that is going to have one last fling with us on September 7th.* 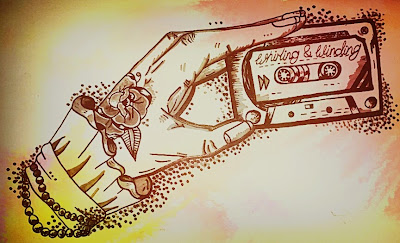 I remember my tape stacks almost beat my book piles for sheer breadth and height and I wasn’t for letting them go so soon – finally buying a C.D. player ’98**- but my relinquishing the paper format to digital will be a longer worn battle. To hear the words cassette, tape or - the wonderfully attuned together - cassette tape is enough to time travel us back to buying our favourite album (OF ALL TIME! Remember?): mine being Faith No More’s Angel Dust; as everyone danced to the merry tune of Kurt and Company I was most definitely one of General Patton’s soldiers (Circa 1992).

My first bought tape was Quadrophenia by The Who at around 12 yrs old*** - immediately pining for it after seeing the film - and as it was a double album it almost took longer to rewind than it did to listen to the actual music. Already having Bowie’s oeuvre, given to me by my father, my tape collection was in full swing and I was already an obsessive collector (comics, books and videotapes****hid my bedroom floor).

But my proudest collection - where I was chief architect, conductor of the invisible waves, curator of my own music jamboree was in recording theme tunes off the Television. At anytime day or night I could listen to the A-Team, Knight Rider or Air Wolf theme tune and that was, to me, the proverbial livin’ la Vida loca. My tastes then went - as they would go all my life, in which ever genre field I found myself walking in - obscurer: Hardcastle and McCormick; Crazy Like A Fox and the greatest theme tune of all (it’s even in the name) The Greatest American Hero.

As time ran forward quicker than a tape can, after picking up music on tapes as the only way to hear them on THE day, I started to collect the cassettes that looked like they’d be ‘Fed-Exed’ from the band to the store that morning. Paper white covers with typewriter type banged out abruptly onto it, saying words like TOOL: UNDERTOW or FNM: WE CARE A LOT (an album I didn’t even knew existed until I saw it!): neither a demo nor a bootleg but something enticingly and excitingly in between. A beautiful freak!

I tried not to sing this as the song of ‘Those Were The Days My Friend’ because the technology we have now is obviously more immediate and accessible BUT as any  pop culture junkie will inform you: where’s the thrill of the chase of ‘the record shop to record shop search’ gone?; where has ‘where ever you holidayed searching out the local indie music emporium’ been hiding?; where has the hours lost in backrooms of dust looking through vinyl for its bastard half cousin the cassette disappeared too?; what has ‘the friend swap’ left us for (even as a miserly youth they seemed cheap enough to buy in threes)?: those times have been eaten up by the eighth wonder of the world - the internet.*****

This day will be international ****** and wish yourself lucky enough to be in driving distance to one of these churches of sin, where CDs and MP3s will be held in a black magical suspicion they deserve and we will worship what we slip into our ‘decks’ once again.

Of course one night stands, holiday romances and office affairs can turn into long term relationships. So if this sweet nostalgia makes you want to keep your tape player out of the loft for good then there are proud suppliers of those lil’ box of delights all the year round. Even searching through their back catalogues brings a tear to the eye and an ever increasing heart beat: it’s almost like the feeling of looking at pop art paintings mixed with ex girlfriends’ letters put together in little see-thru plastic containers. *******
Ciao and happy listening.

*This 24 hr event’s details can be found here: http://cassettestoreday.com/
**This is merely around about guess, but as ‘guestimates’ go I believe it to be surprisingly spot on.
***However this guess is probably wildly wrong.
****Another ‘Celebratory day of the past’ on its way me thinks?
*****It use to be Kong but the net took over as it’s a million times larger than the Great Ape and twice as vicious.
******My evidence here: http://cassettestoreday.com/stores
*******Some superb places to continue: http://suplexcassettes.bigcartel.com/            http://bruisedtongue.com/wordpress/^^^ http://tyedietapes.com/

Nothing says DIY more than punk and nothing says punk more than cassettes. How many of us screamed, shouted and tried to sing into the mic on our cassette player?