It’s taken a bit of consideration to get this piece together and that may be due to a number of factors. It’s not that Young Montalbano is not good viewing – it really is – but it’s so prosaic and laid back we kept getting distracted by the scenery. 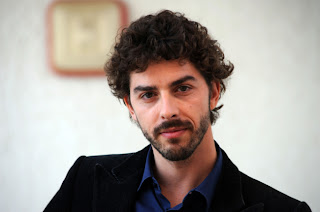 Granted this was not in the same sun drenched town of Sicily that caused so much distraction to viewers in the series that this is a prequel to but there was truly far too much happiness and scenery than any crime drama should ever revel in. But when take into account its country of origin it’s easy to reconcile.

Whilst we’re obsessed with multilayered plots taking place in subdued and darkened corridors with a central figure plagued by any number of domestic and/or personal problems – Italy likes it smooth. The problems in Young Montalbano are rarely bad enough to not be solved without a glass of wine and some fine Italian dining and perhaps that’s why we had to watch it all again.

This is crime drama at its old fashioned simple and perhaps best. There was the odd dash of humour, a bit of sex and plenty of espressos. In Italy this might be everyday life – although it’s hard to say that for certain from a comfy sofa in the wilderness of the UK with a wind swirling outside so if anyone wants to verify that please do!

“They killed him with a stick. It looks like it happened last night…”

So began the mystery in Young Montalbano. The soon to be Inspector was first sighted in the less than sundrenched surrounds of the Sicilian mountains and it’s a relief to see the familiar surrounds of his (at the time this is set) new home in the town of Vigata. From here we move into the familiar crime solving territory of the main series.

The Young Montalbano (as the UK has christened the series) is prone to going his own way, ignoring procedures at willand waking up forensic scientists at three in the morning and its all good stuff. Perhaps refreshingly, the rebel element of such behaviour that inevitably be signposted in most shows is barely touched on here – as the Inspector he can do pretty much what he likes with the rules – with his staff on hand to protest in mild mannered Italian mannerisms and quite frankly its brilliant. Hire the potential murderer in the cells as a cleaner? Brilliant idea! Indeed, said character Viola looks like a slightly less nervous Cheryl Cole in the place we’d all like to see her for her crimes against music and once she starts to speak with more than just one-word requests for water and such like we begin to warm to her motivations for attempting to kill in the first place.

As with all endings on Montalbano there is a happy ending – and happy endings mean only one thing. The man himself can kiss a beautiful woman (in this case his girlfriend) and we know that next week more criminals will come along to distract him from finding excellent restaurants.

In many ways this is a light episode; setting up the arrival of many key characters from the series and as the series progresses I suspect we will see more of an edge to this already well developed character.

Best moment: Any of the recurring ‘conversations with a woman on the phone’ scenes.

Best Line: “I’ll do anything for a plate of sardines…”