It was quiet day – nothing unusual to report until the normally uninteresting threads of social media revealed a slew of new Death Grips videos. Nothing unusual – they have made a lot of them in a very short time! But new song titles reveal much more than just the individual songs but a new album – or it could be a MixTape. But classification aside (something Death Grips have always avoided) this was new music from a band who have set the underground world of the internet a fire in recent years with much excellence. 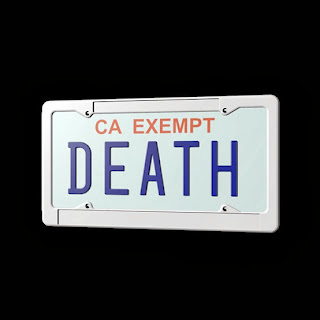 The opening track to Government Plates takes funk like title involving leopard skin pill box hats and puts a searing electric grrrove (Yes, that’s three R’s!) in its ideological place. Just over two and half minutes later and if you haven’t got behind this ear piercing drone rap experience yet then you probably won’t – it’s loud, punk, aggressive and downright  empowering.

Put more simply if you didn’t like any of the bands last three albums then this won’t be for you. It’s a step up in intensity from previous release No Love Deep Web and a step d0wn in word count more often than not. Government Plates see’s a distinctly more melodic approach but not in any traditional sense of the word. There is melody, from the frenzied, almost psychopathic pitter-patter of beats but it’s a twisted, sonic assault based form that is not for the faint hearted or, indeed, anyone afraid of rather a lot of noise.

Anyone who has witnessed their effortlessly chaotic live show will know the score – the beats are present and very-fucking-correct and MC Lite does his scary-cool thing on the mic in a way that couldn’t be mistaken for anybody else. This is Violence Now (Don’t Get Me Wrong) takes a heavy-electro route to greatness that is so full of energy a good few listens are needed to make any certain judgements. A disembodied female voice says ‘You have been banned from the channel now’ during the song and it’s one of the few measured deliveries found on the album. What it all means in the story is unclear but if Death Grips keep on producing work as listenable and above all unique as this it could well be a fruitful one.

Birds, previously released as surprise download earlier this year, also features and it’s just as effective on album as individually heard. The balance between mellowed out electro chords and hardcore interludes is still impressive – and acts almost like a mini summation of the albums balance.  Title track Government Plates is a punk electro feast that is at once difficult to listen to and attractive with its dark futuristic trance elements. It’s almost entirely instrumental as well – the music acting as a reaction to the dystopic catalyst of the title.

There is much to enjoy on G0vernment Plates and unique among Death Grips releases thus far (with the possible exception of their E.P.) it’s painfully easy to listen to all the way through. Hardcore alt –hip hop is the motto of Death grips and this is no different here but with a less wordy approach they have produced an addictive, groove based sound that serves as a distinctive step forward from their past releases.

More than ever this sounds the music you would hear if you were enter a truly great party  - held in the dark with no guarantee you’ll make it out alive or even with all your limbs intact. Dark, sci-fi horror imbued electro melodies mix with paranoiac memes to the effect that you can only be deeply noided. If you know what we’re saying - then you need no convincing.

If not, hit the web now and download the album. We guarantee you won’t regret it…