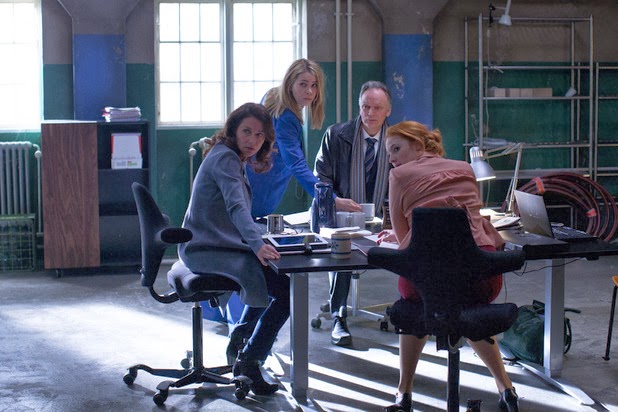 The key words for this double bill were thrilling one’s indeed. Among the many we could muster through the dense rush of activity and development three emerge victorious but beautifully disheveled. These are (and, yes, they are hash tagged) #spys #sex and #secrets. With that, to business in picking the key points of just what happened in these glorious two hours.

Well, that was a step up from the last two weeks of episodes. This was Borgen at its political and personal best, weaving complex threads and developing the characters along the way. For the first time since series three began this was the goods you expect from the show at its best. Hash tagged keyword and more than that!

It was everywhere in many forms from the subtle to ideological. From the raging debate on the rights of sex workers to the growing closeness of the usually stoney faced Torben and Ria to Kasper’s admission to Katrine that he found her transition from lover to mother a difficult one. Not to mention the revelation that Jeremy has been to a prostitute – perhaps not the answer Birgitte expected when she asked him out of the blue.

In typical Borgen style there is more than meets the eye to these events and they all interconnect into the narrative with great ease. Both Katrine and Birgitte take their newfound knowledge very well indeed – as Jeremy says, Denmark is known for it’s “open  minded sexuality” or words to that effect. But chez Torben (He does seem to live in the office, after all…) we’re seeing unnatural words come from his mouth as he tells Ria he wants her in the newsroom while rubbing her thigh quite obviously. Now who wouldn’t have spotted that?! And when their sexploits in the broadcast suite are walked in on by new Director, “Man Jewellery” wearer and creative room furniture lover Alex he’s under even more stress.

But the main debate on sex workers was the main attraction, asking quite serious questions to the viewer in a manner that most British drama would be incapable of doing without getting mired in embarrassment. This was viewing that kept your attention for sure. Balance, balance and more balance was the key.

With a very welcome guest appearance from our-man-from –The-Killing-and-soon-to-be-seen-in-Sherlock Lars Mikkelsen as a top economist and candidate for the New Democrats we were spoilt with acting talent this week. With the central performances on key the addition of Mikkelsen was excellent. Just a pity that it was a guest slot rather a recurring role!

Torben comments at one point that things resemble ‘a John Le Carre novel’ and although he’s not saying it in a good way – it really adds another dimension to the magic formula. When Katrine starts digging up information on Mikkelson’s economics genius we see a different side to both; an apology from Katrine for stepping over the line and a tear from the former supporter of Communist values as he recalls a past lover committing suicide.
#secrets

We discover much in the way of secrets this week with the aforementioned spy accusations, Kasper’s touching confession to Katrine and most dramatically Birgitte going into hospital. The hand pains seen ever so briefly in previous weeks are now a key point of drama. As we see Birgitte in a hospital bed, surrounded by nothing else but white soulless hospital walls we see just what series three is about. Loneliness in company has been a very subtle theme this year, from the initially difficult interactions between Kasper and Katrine to the scenes of Birgitte walking down a corridor alone, telling no-one of her visit to hospital.

Even the revelation that Torben has a wife (not seen before, although we could be wrong) comes as a surprise, especially given his burgeoning relations with Pia. Will his secret be safe with Alex? Only next week’s double bill will tell…