Vertigo, DC’s mature imprint for the stories that superhero comics could never handle is one that we love. As confirmed irregular readers of comics, it’s one of the few imprints we’d rave about. With a reissue of the nineties miniseries The Extremist in one very readable deluxe edition as part of Vertigo Resurrected they have struck gold again. 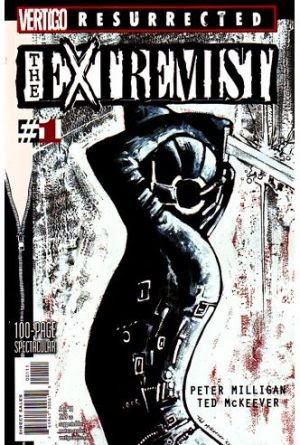 First release in 1993, the series is still a fascinating one that makes you ask questions not just of the writers but of yourself.  We’ve often thought that we were being extreme or doing something different than the rest of society – that’s just what we do. We are all extreme in our own way, and it usually has little effect on others. Or does it? This thought provoking story shows just why The Extremist is not just a person; it’s a state of life.

The black leather cloaked, gender-anonymous figure that graces the beautifully rendered cover art could be any of the people who don the costume of The Extremist during the story – it could even be you. By nature of such a storyline, there’s a kinky, darkly sexual element to proceedings. The murdered husband of Judy Tanner would don the guise of the titular Extremist in his capacity as a hired assassin for The Order and often frequented the darkest form of sex club in said guise. When he is murdered Judy takes his costume and becomes The Extremist herself, murdering a woman who she thinks killed him.

The artwork by Ted McKeever is engrossing, film noir inspired stuff. Steeped in a very colourful darkness the simple but grainy portraits of the characters are just normal enough to draw you in with great ease. The script too is laced with enough dark hints and revenge motivated drama to keep you intrigued by the dark and often bloody and sexually explicit plot turns. The Extremist should be a read that you can’t finish but in the tradition of the best murder ballads you can’t help but enjoy the journey to the end; one which is very extreme indeed…

The Extremist is available now from your nearest comics shop and is published by Vertigo.