Experimentation is an essential part of any Björk album. Thus it is that 2004’s Médulla is almost entirely made of the human voice. That is to say, not just those unmistakable vocals of the Icelandic singer herself. Médulla uses the voice as an instrument in itself. 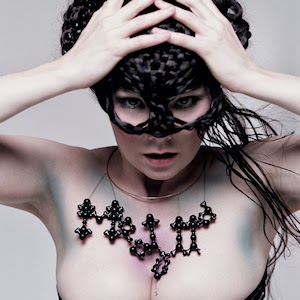 Each of the fourteen tracks is a unique, and at the time, her most ambitious album yet in terms of concept and execution. There are some basic elements of electronic programming to be found but the rest is pure vocal sound. When it first is listened to there are few of the dance orientated hooks that her earlier work contained – but that does not mean this is any less of an album.

Little of Médulla is instant and almost a decade later that remains true. But it is a timeless, earthy record that has aged very well. The casual listener will not be recommended this particular album as a starting point but arguably this is the record that encapsulated perfectly all that makes Björk a valid cultural icon.

Médulla is imbued with a sense of beauty that is deeply affecting. Vocal music is the oldest form in the world – and yet we hear it so rarely. It is considered by many a preserve of the church or religion. But is it really? It’s hard to pinpoint an album from an artist with a global standing that has attempted the same thing as Médulla does. And with a deeply political content it throws social commentary, music pre-history and free thinking experimentation into one potent mix.

From the opening ghostly voices of Pleasure is All Mine to the raw Where is the Line this is a compelling but initially dissonant record. When this writer first listened to the album at the time of release it seemed like something very strange indeed. Perhaps many felt the same – it’s rarely mentioned as a highlight of her back catalogue. But like the genius hiding behind invention Médulla deserves much more than one listen.

The Icelandic Choir features, to great and haunting effect, on most of the tracks. Most impressively on Desired Constellation alongside some music box like synth programming. This kind of music demands silence in the vicinity, a concentration of the mind that most radio bound songs rarely deserve or ever get. Mouths Cradle is another highlight, its twinkling programming and vocal composition something you can’t fail to appreciate. There are moments where the mix seems almost too perfect – but perfect it is. Its chorus is simply a moment of sheer musical joy.

Another moment of superbly creepy weirdness is Submarine. Featuring Robert Wyatt, there is truly a sense of being underwater, submerged in a sea of natural timbre and verbosity. See also the Tagaq co-written Who is It (Carry My Joy On The Left, Carry My Pain On The Right) for another strong statement of intent on an already very physical album.

But what makes Médulla great? Björk has never released a truly bad record so quality is not the only thing that makes this an essential listen. Simply, perhaps it is is one of her most instant albums. Previous release Vespertine was a delicate, shadowy listen – beautiful but needing of attention to make it truly understood. Médulla on the other hand has a beauty that is truly vocal.

The human voice is our only natural element for communication. Written words can be forgotten, languages can be misunderstood but sound and voice can convey much more.
By putting together a set of challenging but ultimately rewarding songs Björk set the bar for experimentation in her own work at the time and continues to do so with every release. Médulla is truly an album that befits it’s raw and very human qualities.