After five weeks of poker faced conspiracy and a decent count of bodies and intrigue Salamander comes to an end with this much anticipated finale. But did it deliver? 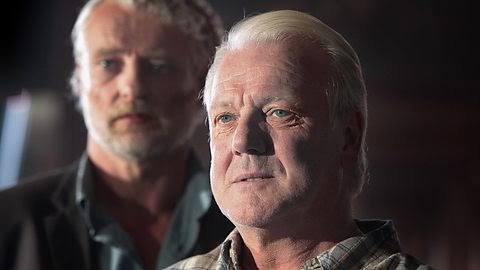 We’ve said before that Salamander is hardly the most original of series, but that’s not to unfairly knock it. In some ways it’s a by the numbers cop show that has mixed in elements of conspiracy theory and action movies and exists as a strange but compelling hybrid of them all.
These final two episodes do nothing to shake that notion but they do resolve the plot in an unexpectedly uncomplicated manner and set the ball rolling for the reportedly already green lit second season in a neat but vague manner.

With Geradi dining at Salamander destruction bent Gils Wolf’s very nice house in the country and finding a new girlfriend in the process things move quickly from there. Soon (and somewhat predictably) his real identity is discovered and the vague plot strokes become clearer as we find out just what Gils plans are. In fact, they are remarkably similar to more than a good hour’s thoughts about the plot would indicate.

The flashback sequences are given context as learn that Salamander boss Jonkhere’s father framed his father as a traitor after shooting him after that fateful delivery in 1944 and, rather understandably he isn’t too happy about it. This last minute bonding between the two men doesn’t really resonate in any emotional sense but then again Salamander is not a show to dwell too much on such things, after all.

Indeed, when Gils’ former stealth contract killer Klaus is discharged from his service, the big guns come out. Literally! With Klaus offering the whereabouts of Gils and the 66 files to Jonkhere a closing narrative quickly emerges. Of course, it’s a bloody ending with Jonkhere shot by Gils so suddenly it seems like nothing has happened. A second viewing is called for perhaps?

As to the closing minutes, we see Geradi placing flowers on deceased wife Sarah’s grave with daughter and co on hand.  Is it a happy ending? Looks like it… but is all it seems? You really never know in Salamander. We then see a flash forward to six months later, and the slimy Vincent is leading a meeting with the council of the Salamander group, listened to by Geradi. The troops come out, guns in hand but is it the end for Salamander? It’s difficult to say until the second series is broadcast!

Over twelve episodes, (perhaps too many on reflection when ten would have sufficed and kept slower moments to a minimum), we’ve seen good old fashioned detectives, conspiracy, murder, sex, tragedy, politics and family collide together in what has been an enjoyable but on occasion too easy ride. Many will have compared this to forerunner in the coveted Sat 9pm timeslot The Bridge and found it lacking, but perhaps that’s not the point. Taken on its own Salamander is a well acted and produced show that needs a good trim on occasion, but that shouldn’t stop you from enjoying it as a good old fashioned European detective romp that needs the belief suspension switch turned extremely high.