As is usual for me, I bought this album on a whim whilst doing something else. The thing I was doing at the time was gig reviewing for another band which The Invisible supported in Liverpool. But, whilst the other band were brilliant, these guys were/are brilliant for other reasons! After watching them play their set I was suddenly struck with an instant impressive moment that made me have to purchase their album straight away. And, I did. As albums go, this is a highly excellent one. 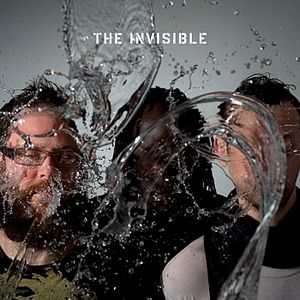 For a start, the album artwork is simple yet deliciously effective, shots of the three band members behind water seemingly sprayed up in front of the camera. But, it gives absolutely no indication of what we get on the album. Art for arts sake, the phrase is I believe. The album is a mix of funk, alternative rhythm, restrained dance beats and Prince like vocals and instrumentals.

One could easily imagine the Purple one singing Passion with no problems, it's refrain of "wash my feet and kiss my eyes, let me sail into your skies..." is easily the embodiment of a perfect lyric couplet to this reviewer. It says in the jacket that "this album was made in the spirit of gratitude". However, I think it is we who should offer The Invisible the gratitude.

Simply because they have delivered an album of modern alt-soul with all the right ingredients to break into other genres without seeming incongruous and have the gift for writing stunningly brilliant songs that feel fresh and relevant but totally their own. There is a definite element of genius to this album, and this is embodied by the cool vocals of singer Dave Okumu who alternates between sweet soul musings set to funky backing from drummer Leo Taylor and bassist Tom Herbert and dark voiced half singing that seriously impresses with its ability to carry you away to Invisible land on a ship of funk bass.

Of course, the whole album is a slice of modern genius that wraps you up and entices you into its universe of melancholic love and epic emotions that seriously makes you want to move. That's not to say it's all sex and romance though, the song titles suggest a deeper thought process to the affair than mere canoodling in funk town. Jacob and The Angel suggests a religious angle, as does Tally Of Souls, whilst the rigors of living are invoked on album opener In Retrograde and Time Waits. The stand out tracks Passion and Monsters Waltz suggest that a night with this band might be the ultimate in pseudo sexual experience. I don't say that in jest, I simply mean that this album is like a musical pheromone that will lift your spirits and definitely get you thinking about life and it's implications.

Spirituality is hard to put to music, but The Invisible have done so without losing anything in the translation. The bass being constantly to the fore is also highly reminiscent of the much loved but little known alt-soul singer Me'shell Ndegeocello. Here's to hoping that The Invisible won't be as criminally ignored as Ndegeocello! I could say more, but the fact is this album is a premium listening experience. There are feelings I had whilst listening to The Invisible that couldn't be put to exact words. I think you will feel the same as well.