It might have seemed as unlikely as a dead parrot coming back to life, but next month, the team who have been described as “The Beatles of comedy” are set to return to the stage.
45 years after their TV debut, the Monty Python team will be reuniting for ten shows in London.
The five remaining veteran comics (Graham Chapman died in 1989) will not be performing any new material, just well-loved and oft-repeated classics like the brilliant “Argument Clinic”. 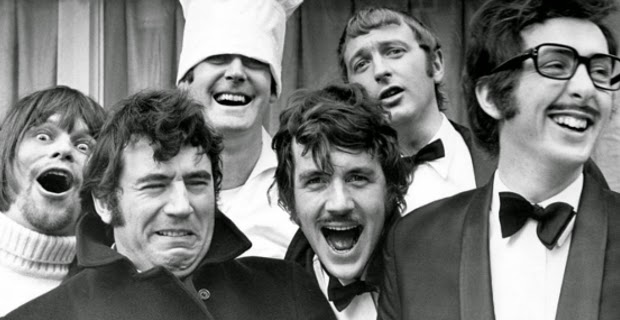 Such pieces have become iconic in the national culture, particularly for those who witnessed them the first time around. My Dad was one of those fans who witnessed the Monty Python’s Flying Circus TV series, which ran from 1969-1974 and the other day he was telling me about the impact they had on his generation. To paraphrase, he said “we liked them because they seemed like us”.
The Python team, all ex-students with an irreverent attitude, embodied a cultural change in the country. Their lampooning of many aspects of British society and the class system resonated with baby boomers who had grown up in the repressed post-war years.
In keeping with other cultural revolutions of the era, their shows and later their books, records and films exploded the conventions and structures of comedy, creating a kind of anarchic intellectual playground where ancient history and philosophical discourse were wired up to the chaotic energies of surrealism and silliness.
Their impact on comedy, and culture as a whole, was enormous and continues to this day. But do we really want to see a live comeback of pensionable Pythons? And does that old material have anything relevant to say to the Britain (well, the London) of 2014?
It might be useful to compare the Pythons with another group of performers from the same generation. The Rolling Stones are currently on what, depending on who you believe, could be their last tour.
The Stones have never stopped playing live and Mick Jagger, always a highly physical performer, inspires amazement that at 70 he can still pull it off. Last year’s Glastonbury performance proved that he has plenty of strutting energy and charisma left.
Like the Pythons upcoming shows, the Stones’ live gigs are built around their most famous material. But there’s a big difference between music and comedy. We can listen songs like ”Satisfaction” indefinately and they still sound fresh; a good song keeps on giving. But the impact of a joke is always most powerful the first time around; the humour comes from the surprise of seeing the world from an unexpected angle. The Pythons themselves emphasised this in “The Funniest Joke in The World”.
Of course the Python team don’t do jokes, as such. Their sketch-based comedy is sophisticated and repays repeated viewing, but I suspect there will be more chuckles of nostalgic affection than gut-bombs at their shows next month. Hopefully they will be able to inhabit the characters and material convincingly despite their advanced maturity, perhaps with some ad-libs and asides to freshen up the iconic routines.
Eric Idle has already tested the water for this kind of enterprise with his massively successful musical Spamalot which combines the script of the film Monty Python And The Holy Grail with a selection of the team’s best known songs, although none of the original team are involved onstage.

This will be the last chance to see the much-loved comic pioneers performing together. But any fans hoping to see the silly walk sketch have been told not to expect that particular hit of nostalgia. Following John Cleese’s hip and knee operations, attempting it would be a very silly thing to do…
Words by Tom George. This post was produced in association with Tom George Arts.