“It won’t be over until I stop you…” (Stella Gibson) 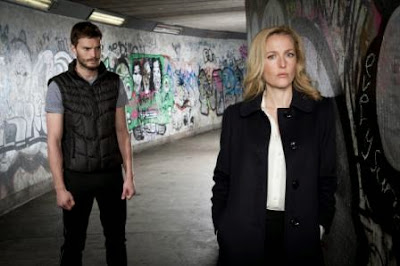 When The Fall concluded so suddenly, dangling on a very big thread at the end of its excellent first series the question over its return had already been answered. With only five episodes, it was clear that creator and writer Alan Cubitt was playing a long game with this series.

Watching the first episode of this second series, the game is obviously on as the plot is picked up immediately, with Gillian Anderson’s Stella Gibson interviewing Specter’s last (and failed) victim in hospital in an effective performance that keeps the quiet tension alive as if we’ve just finished watching the last series a week ago.

Meanwhile, the ever more creepy (but curiously easy to empathise with on occasion) Paul Specter is holed up in a white cottage in the middle of nowhere looking as mildly stressed as ever. More importantly, he’s by himself, his wife and kids having returned home in the interim.
Soon, though, he’s back in Belfast, spurred on by two factors. Delivering his daughters Dollies back home secretly and to find his next victim, conveniently one of the biggest pieces of the puzzle in putting a case together against him. Will she make that appointment with Stella the next day? Somehow we’re not so sure…

This first episode is, by necessity perhaps, somewhat less action packed than you might expect. We see development in the story but it is in steps rather than hurdles and it is built on set pieces rather than narrative action. No bad thing, when they are so utterly brilliant. One key moment is during Specter’s journey back to Belfast, when he jokingly flirts with a woman sat opposite him about whether his photo fit on the front of a newspaper looks enough like him.

It’s played so well it’s almost darkly humorous despite the clear sinister implications of the conversation. Even when he does get back to deliver the aforementioned Dollies to his daughter, his letter sent by ‘Pixie Post’ is sweet in the most sinister way. Should we be empathising with a killer? It’s the age old question in drama, especially when in one brief scene we see him tie up one of the Dollies like one of his victims.

But whilst we get some emotional coverage, however twisted, from Specter we get little from the ever icy and inscrutable Stella Gibson. In interviews, Anderson has indicated that this is deliberate and finishing the episode it’s a good thing.  Bar an admission that she used the now dead Jimmy Olson (shot in the first series, you may remember) for sex, not anticipating being in Belfast for very long.

Not a whole lot happens, for sure, but this return from The Fall is still outstanding viewing. Crafted sensitively and often unflinchingly by Alan Cubitt, it’s no wonder so many people were anticipating its return. Roll on next week!