When we last heard from Novella it was via a rather cool cassette release of somewhat different versions of a few songs that feature on Land in a sonically expanded form. That was the Murmurs EP but now we’re into full album territory the music has expanded into directions hinted at previously that take full flight here. 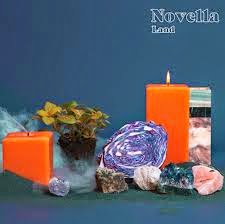 Opening with an amped up version of Follow, Land is the album you would have expected from the band. The psych inspired sound of the band has come full circle with a fuller, expansive production marking out the album. This is evident as you go through the album with the guitar work fighting with the vocal for attention and against immediate expectation it’s a winning formula.

Something Must Change is a different prospect from the band, heavier on the guitar as mentioned above and hard to ignore in its increased power. Also of note is lead single Land Gone, as distinctive a song from the band as the still extremely listenable Mary’s Gun single from a few years back, and another familiar yet sonically enhanced cut from Murmurs in the form of Blue Swallows.

But perhaps the most enthralling aspect of the album as a whole is the genuine feel of listening to music that feels like you’ll be listening to it for many more years to come. There is a distinct element of dream pop sensibility also in the mix and taken over ten tracks with a bigger sonic scope and expanded possibilities Land is an album that has been long awaited and will almost certainly be long enjoyed.