The first time I heard the music of Kathryn Williams was quite by accident almost 15 years ago. As with many an impulse musical purchase; (Yes, purchase! That did happen at one time in history!) It was a visual sensation that drew me in. The intriguing cover of her second album Little Black Numbers attracted my eye and ever since Williams’ compelling brand of music that draws the listener in the most subtle of manners has kept me company at some point. 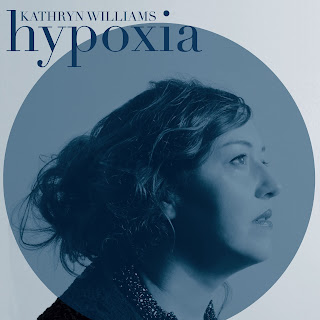 Hypoxia is the newest album from the artist and is a short but very satisfying listen. Clocking in at just over thirty minutes it’s the equivalent of a walk around the lake, a bittersweet coffee in contemplation of a problem that is ultimately resolved. This music, based on the seminal work of Sylvia Plath in ‘The Bell Jar’ is always atmospheric, never predictable and surprisingly simple in it’s construction.

The glue binding it all together is the distinctive voice of Kathryn Wiliams, always expressive and clear and this time with an edge that was only hinted at previously. This album is far from cheerful on many occasions, and the sparse instrumentation seems larger than it actually is. That is no bad thing, of course, when the topics covered are actually very dark, a great reflection of its source inspiration in many ways.

On first listen to Hypoxia it’s hard to not want to hide in a semi-comfortable corner and keep the music all to yourself. There’s an underlying tension that is almost uncomfortable but somehow transcends that initial feeling and becomes a very positive experience. One could almost say that this is one of the artist’s most intimate albums since her very early releases.

In terms of the traditional highlights a review must highlight there are a wealth but to single out one track would be a pointless exercise.  Listen to Hypoxia as an ALBUM and it works perfectly enough to not need to single out a highlight. But if pushed we would choose the rather cool Mirrors with its bass heavy jazz like arrangement that soon gives way to a stronger line of guitar chord than heard on any previous record.

In summation then, Hypoxia is a complicated emotion of a record made beautiful by a heavy Sylvia Plath influence and arrangements that evoke much in their sparseness. Listen well and listen again!