Many a fine record has come from the truly diverse Righteous Babe Records, home to such artists as its founder Ani DiFranco and more besides. We always support independent record labels and there’s barely been a record from Righteous Babe that we’ve disliked.  One of our favourite albums of recent times after rediscovering it by chance is Anais Mitchell’s excellent concept album ‘Hadestown’. 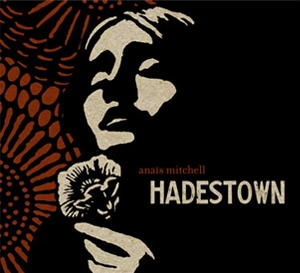 Hadestown began as a folk-musical co-created by Mitchell and gone through several incarnations since its inception. This version features a selection of guest performers portraying the various characters of the post-apocalyptic Depression era set story. As evidenced by the title, it’s based upon the Orpheus mythology and takes us way down to Hadestown with a hugely enjoyable and ultimately thought provoking journey of song and poetic lyrics.


Opening with the pensive and graceful folk of Wedding Song, where Mitchell, in character as Euridice enquires to husband to be Orpheus (Ben Knox Miller of The Low Anthem) how they can afford their wedding. The chorus is one of the highlights here as nature is evoked to supply the materials for the upcoming nuptials. A fine start to the record but it gets better as it continues.

All the performers assembled here get a fair amount of time at the microphone and each gives a uniquely beautiful performance that creates a truly unique album. A folk-opera based around Greek mythology might not sound an instantly accessible project but Hadestown has a way of worming its way into your consciousness and staying there for a very long time. Its titular character Hades (as portrayed by Greg Brown) shines on tracks such as Little Song Bird with deep, dramatic vocals keeping the inherent drama of the whole production to the fore. Perhaps the most affecting track on the album is Why We Build The Wall, a strikingly political song that uses a call-and-response chorus to hammer home the point of the wall: “to keep us free”

This is followed, perhaps appropriately, by Our Lady of the Underground, an Ani Di Franco lead track as Persephone. Notable for the completely different style of vocals from Di Franco, there is a clear funk and blues edge here, further expanding the sonic world of Hadestown. There is a clear narrative to Hadestown as a whole and, whether you choose to follow it or not, the journey is an affecting one. The power of words and the force of nature cannot be understated and over twenty tracks this album constantly impresses, often changing guises but never losing your attention for a second.

As the artists third full length album this clearly debunks the theory of the ‘difficult third album’ and reaffirms the power that truly beautiful, well thought out music has. Combine it with a narrative and a story the listener can engage with easily plus a lot of gifted performers and you have a winner that will not age much in the decades to come.