At long last, The Returned has returned! Two and a bit years after the end of series one, the haunting French series about a strange Alpine town where the dead come back to life is back on our screens... 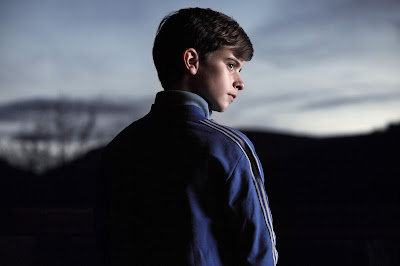 Eschewing any expected “Previously on The Returned…”, episode one goes straight to the story six months after the events at end of series one. To jog your memory, at the end of series one, a horde of the undead who had been lurking in the woods, comes to bring back their own who had been living back in the town. The townsfolk had been barricaded in the Helping Hand - the weirdest community centre EVER - while the Horde menaced from outside.

The town’s gendarmes went out to fight off the horde and neither the gendarmes nor the undead were seen again. Neither were returned Camille, Victor, Simon, Madame Costa, or the living who went with them - Camille’s mother, Claire, or nurse, Julie, who had been taking care of the strange, dead child Victor. Also disappearing with the Horde was their leader (and former barmaid from the town’s only bar, The Lake Pub) Lucy, who may or may not be a ‘revenant’ herself.

Six months on and the town is all but deserted. A magnificent stag wanders unhindered around the town’s urban concrete and soldiers appears to be running things. The people who remained after the  town was flooded are settled in either the Helping Hand or in the world’s most depressing caravan park, including Camille’s now older twin Lena and their father Jérôme, who has clearly lost his mind on account of his unkempt, beardy appearance.

New (actually, returning) to town is engineer Berg, a man who appears to know more than he’s letting on about the returned, sent to investigate the reason for the reservoir flooding the town and claiming to have ‘new information’ on events in the town. What Berg does or does not know, we’ll have to wait and see.

What we do know is that there are new ‘revenants’ in town. Toni (former owner of The Lake Pub and brother of undead serial killer Serge), who killed himself in a Victor-assisted suicide in series one, is back and fighting the people in the hospital charged with caring for him. Also newly back from the dead is teenager Audrey, who died in the same bus crash that killed Camille four years ago.

But the main focus of this episode is Adèle. Adèle is pregnant with the child of her dead lover Simon. But what is this child? Haunted by nightmares of the unborn child she has tried desperately, but in vain, to abort, Adèle prepares to give birth to her unnatural child, who appears to be full term at only six months. With Simon stalking her house, wanting to claim the child, the future for Adèle seems nothing but bleak.

Her future seems to be presaged by Victor’s disturbing family portrait drawings as he is holed up in a deserted part of town with Julie. He makes Julie promise to never leave him just before his long dead maman puts in an appearance.

Also holed up in a creepy house in the Deadsville part of town are Camille and Claire. They take in Audrey and appear to be terrified of the horde coming for them (too late!).

Simon and a serenely terrifying Lucy ready themselves for the arrival of Simon’s baby and more undead as we see that Serge is also back. With a gun. And his dead maman.

As Adèle counts down on an operating table and Mogwai’s beautiful and unsettling soundtrack plays, the scene is set for another series of this unique and unusual series.