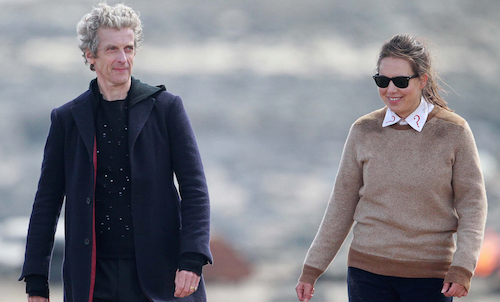 The conclusion of this rather topical story is just as you may have expected. If we hadn’t been given that deliciously good triple pronged cliff hanger last week we would have the pace slow down after an action packed set up and relished the conclusion all in one sitting. Indeed, if you look at the whole picture here, (despite the proof that two parter’s really are working for this series and we really hope they’ll continue in that manner) The Zygon Invasion and Inversion are a well-judged take on the Earth invasion plot with extra pathos coming from its politically charged elements.

In a series as varied as Doctor Who you expect variety but the shift in tone displayed here is impressive. The key moment of Inversion is The Doctor’s impassioned plea for the two sides to stop fighting needlessly and think properly about what they were doing. Could they really push the button? Could they really enter into a conflict that would be devastating on both sides? As Bonnie (in the form of Clara) stands facing Kate Stewart in the Black Archive and all is at stake between those two coincidentally coloured boxes, the much discussed Osgood Box and The Doctor Box, the answer comes back with only Bonnie left to convince. The good deed is done, catastrophe averted (perhaps expectedly, it must be said, as the moral of the tale is fulfilled) and Earth is safe for now.

As the fourth multi-parter of this series we’re treated with much goodness besides as well. Just as Peter Capaldi gets his moment to shine, Jenna Coleman gets to effectively do Bad Clara and it’s a joy to watch. The scenes were Bonnie attempts to threaten Clara with death if she doesn’t reveal the location of the Osgood Box are very effective especially. It almost makes you wish Clara would go bad more often! But still, we have four more episodes to go to see what plays out…

But asides from the rather atmospheric scenes with The Doctor and Osgood hunting down the Zygon in a darkened shopping centre, the pace of Inversion is never more than contemplate. This works well, building up an atmosphere and immersing the viewer even more into the story. This draws attention to other small details as well, such as some nice references to past UNIT adventures. (5 rounds rapid anyone?) Also, its fun to hear a reference to the frequency of The Doctor’s adventures set in London when he describes the city as “a dump” to Osgood, who quite correctly points out how often he’s there. On the strength of this episode, Osgood would indeed make a good companion and hopefully we’ll see the two of them soon.

Best line: The whole of the Doctor’s monologue against conflict is certainly worth reading in words, never mond witnessing in its full glory.

Clara: We’re still not clear on how her exit will proceed but it’s good to see her getting some real action in this story.

Continuity: References aplenty, as with much of this run, for the hard core fan and casual viewer alike.

Next: Sleep No More