When Lulu was released in 2011 it wasn’t known that this would be Lou Reed’s final album. As Lou Reed albums go, it’s not unusual to get a curveball every so often and over his almost fifty years of releasing records there were plenty of such curveballs. Said curveballs have become the inspiration for many a new artist even now and to listen back is to learn much. But just as his work has aged well mostly and gained much respect on the way; there is always, inevitably, one project that will divide opinion almost exactly halfway. That project, (not uniquely in his catalogue), is Lulu. 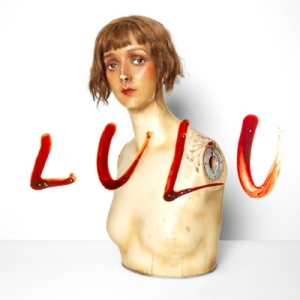 This concept album collaboration with Metallica was rather an instant divider of courts when you consider just how different the two artists’ fan bases are. On one hand the Lou Reed fans were quietly thinking just what could happen but on the other, the Metallica fans were jumping the band wagon of scepticism almost instantly.  Whichever court you side with, it’s hard to deny that Lulu is certainly an experience.

Over two discs of often brutally claustrophobic music, the barely tempered sound of Metallica mingling often uncomfortably with the gruff poetry of Lou Reed is openly asking the listener what they think. Whatever the reaction may have been its certain that not much of a fuck was given either way by the artists.  Lou Reed was famously blunt about his music and given the cocktail of metal and performance poetry on offer here it’s a good thing.

For this writer though, the reaction was a positive one. Lulu contains music that isn’t trying to be cute or comfortable and right down to the jacket there is little beauty in the traditional manner on offer here. The View displays this perfectly, as Reed expounds his dark words over an oppressive bed of metal there are no pretensions. If Art Rock ever truly existed then Lulu is a great exponent of  its uncompromising virtue. The famous cries of ‘I am the table’, much mocked if you look at the comments below its video on YouTube, is a key moment.

The question though is whether the album has aged well and kept its appeal. Certainly, as Reed’s last release in his lifetime it’s an important one but in a catalogue as unique as his it has much to compete with. Some have noted that he isn’t actually singing but… does it matter? This album is an exercise in pushing music to its most destructive edges in metaphorical terms and it succeeds with its masochistic, violent imagery and delivery that spares no one. It’s comparable to his earlier album Berlin in its dark tones and follows a similar premise in many ways.

Anybody expecting happiness is mistaken as Lulu ‘s narrative veers into ever more masochistic territory, (Mistress Dread, most notably) and asks questions, such as on Cheat On Me,  and when the second disc finally finishes it’s almost a relief as the emotionally draining musical finally ends. Reed has always delighted in making the listener uncomfortable and in not sparing the whip, melodically at least, created an album as uncompromising as any in his career.