Death Grips – you may have heard of them and you may have not.  But once you’ve sampled their music you will have an opinion. Uncompromising, aggressive and never boring or doing the expected their debut Mix Tape Exmilitary is a potent listen. 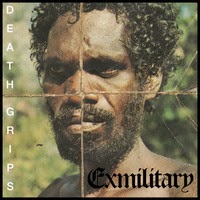 Although it was released onto the unsuspecting world in 2011 – they have gone from unknown to notorious in a very short time. When the sampled voice of Charles Manson opens the collection with one his famous speeches we know instantly this is not just another underground release.

Once you’ve heard Exmilitary you will probably really love it or really hate it. It’s one of those albums – a band like Death Grips take no prisoners, visually or sonically. If you like ear piercing, punk influenced, soul shattering beats then you can get them right here! Indeed, one of their signature songs Guillotine features here and it’s never a less than eye opening listen. Indeed, MC Ride’s deranged, violently punctuated semi-rapped, semi –shouted vox are enough to convince you that Death Grips really could live up to their name.

Spread Eagle Across the Block also gives us the same, accentuated with samples guitar and the declaration ‘ain’t no fun if the aliens can’t have none’ and the sheer power behind the bands production and delivery. Many would say that Death Grips are loud and uncompromising but merely being loud and uncompromising does not great music make.  There is art in the music produced by Death Grips – it’s obvious from their whole energy and passion that screams through your earphones like a volcano of sound.

But more than the album itself this album showed the world that Death Grips were serious. Any band with this amount of creative energy is not to be underestimated. One look at their often bizarre videos shows you that they know how to make a noise about themselves. If Takyon (Death Yon) is an ear beating slice of alt-hip hop perfection then the visuals have to be even more iconic. Indeed, the video is as unique as the song itself.

Exmilitary is no doubt an unusual album. Its mix of hard beats, digi-punk ethos and dark imagery courtesy of MC Ride’s screams and killer lines make it a must listen. You may say that it’s difficult listen – and it probably is. This is not music for those with a quiet disposition. It oozes aggression and uncertainty from every pore and rarely stops for breath. This kind of album makes or breaks a band – and it certainly got them into the world’s iPods when the MixTape was released back in 2011.

Highlights from the album include the riff flavoured I Want It I Need It, where the urge to jump into an evening of sex, drugs and rock n roll is explored fully – and viscerally. It’s an ugly but addictive track that segues very neatly into the very different Blood Creepin’. As an closer it’s not a quiet one, the pause for breath never comes; Indeed it gets lost in the industrial hardcore production that is multi layered, extremely noisy but never unlistenable. On the contrary, like much of their material, it’s simultaneously loud on an industrial scale but always well produced, melodic and never boring.

But you wouldn’t expect boring from Death Grips anyway. Exmilitary is the first step (excluding the earlier Death Grips E.P) in a journey that only gets more interesting…