The question: can you ever truly enjoy listening to Kanye? It’s not an insult, it’s a genuine question. Is it really possible to separate the Twitter Kanye from the Kanye who produces some actually really thoughtful music on occasion? We’re going to try to, after enjoying the, ahem, quietly brilliant Yeezus, (kind of a cousin to this release, complete with the trademarks of the artist - unapologetic bombastic statements and the kind of guttural screams that could be really scary in the right moment) and the erratic yet listenable Life of Pablo. 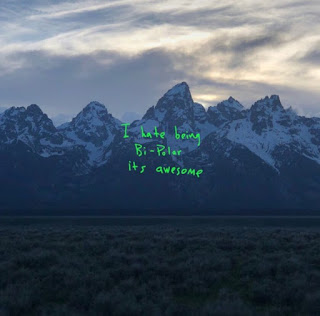 At only seven tracks and a brief twenty-three minute running time, it packs in much, from the Death Grips inspired (sans though the delightful art insanity they can turn out on a whim) to the soul inspired to the frankly Ye inspired. Despite all this, and the unfortunate allusion to slavery being a choice referenced in the lyrics that quite rightly even Kanye can’t get away with, there is a genuine heart behind the fronting it seems. Granted, it’s hard to know how to take the almost darkly comic line in All Mine suggesting that ‘two tits prove I can concentrate on two things at once’ (or words to that effect) and it would be just plain sexist if it not for the context of this whole album.

That is, we know Kanye is just exactly as you find him but Ye (the album, that is) is the first truly cohesive and soulful record he’s produced in quite a while. Opener I Thought About Killing You is a pleasingly philosophical piece that is just as its title suggest. It’s a more experimental track, various voices in an internal monologue that perhaps reveals much about the artist and his current state of mind. Whatever you think of Kanye West, this is one astonishingly fresh listen.

Yikes continues the dark theme, with a pulsating synth beat and the kind of rap that Kanye should do way more often, dramatic and genuinely thrilling. Indeed, it follows the godly proclamations of the brilliant I Am A God (found on Yeezus) with, for once, a step down as ‘I’m a superhero’ is boldly proclaimed, in a seriously big yourself up final line. The highlight of the seven tracks though is No Mistakes. The ideal mix of bombast, über confidence and tenderness, it just works well and no more than that. And isn’t that all you need? In the world of Kanye West a simple statement is something to be treasured, after all, despite the typically rough hewn tendencies of his work .

But let's think about the cover art. Seriously, it’s rather good to see such a statement on the front of an album. In fact, it’s positively brilliant. Is it intended ironically? Is it a statement from Kanye himself or does it come from another inner voice? Taken by itself, it’s a really positive thing but is this album cover the most appropriate venue for it? That is the question this reviewer asks and whatever the answer, we’re loving this phase of the saga of Yeezus and in a diverse world we wouldn’t have it any other way.  If someone can have a word about his seeming love of Mr T’ though, we’ll thank them…